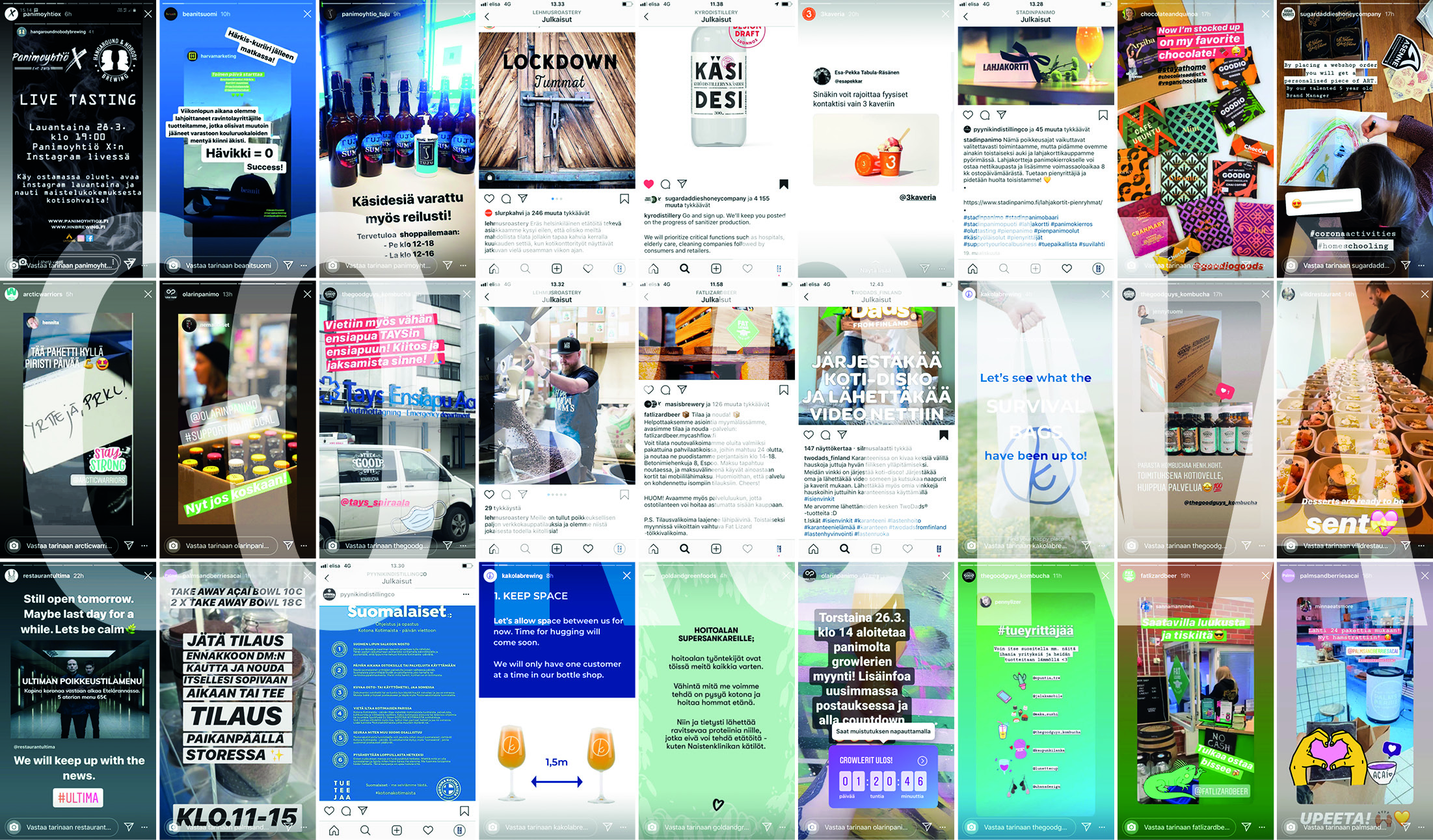 Pressing COVID-19 pandemic: an acid test of creativity in the food and beverage industry

Product development is a team sport in small food and beverage companies, requiring creative collaboration efforts between entrepreneurs and their stakeholders. As the epidemic continues to stir the marketplace and ways of working, rapidly created novel and rebranded products, sales channels and market positioning are emerging in response to the  ongoing crisis.

Media has been actively sharing examples of restaurants stepping up to the challenge of recreating their dining and eating experiences. For example, Villd restaurant has started taking orders for home delivered brunches and the founder of Finnjävel, Henri Alen, along with his team, transports fine-dining inspired traditional meals around the Helsinki Capital region. In addition, there have been numerous examples where grocery stores have started selling ready made meals from local restaurants, as in the case of K-Market Töölöntori joining forces with the neighboring Linko Pizzabar and vegetarian restaurant Magu, amongst others. Whether these new product and service concepts remain as the acute crisis passes remains to be seen.

Not only has the restaurant sector actively shaped their businesses, creative changes also occur in the realm of packaged goods. This is really going to be an acid test for the entrepreneurs on how different resources can be creatively combined to battle against the unusual circumstances. Physical proximity with different stakeholders, as well as preplanned ingredient and production investments play a big part of the business, adding to the challenge. The following examples highlight new solutions that we’ve seen happening just in the past three weeks, illustrating some of the ways entrepreneurs have been joining forces to rise to the challenge.

Whether forced by the circumstances or creatively pivoting to cater to the situation, newly rebranded products and even radical production alterations have taken place. One of the earliest examples of quick reactions came from Espoon Oma Panimo, which turned their 8000 bottles of beer meant for restaurants and summer festivals, into a Poikkeustila branded beer and avoided being stuck with surplus inventory of unsold products. Lappeenranta based Lehmus Roastery, in turn, got the idea for their LOCKDOWN coffees and teas from a customer, who wished for larger package sizes to beat caffeine cravings in a home office lockdown mode for the upcoming weeks.

In addition to single products, bundling products into special packages tailored for online orders have appeared. The chocolate company Chjoko came out with their ‘Karanteenibox’ (“Quarantine box”) and Kakola Brewing Company has been selling their own ‘Sissikassi’ survival bags, consisting of a selection of their different beers. These types of bundles have not only been targeted to one’s own stashes of supplies in the home quarantine, but also to cheer up others coping with the situation at home.

Some changes in products have gone down to the entire production process. Shifting the production to hand sanitizers and disinfectants has been a global trend, especially amongst beverage companies and distilleries. Olaf Brewing, for example, was one of the first Finnish breweries to produce hand sanitizer packaged in beer bottles and Kyrö Distillery avoided temporarily laying off their employees by shifting to the production of disinfectant aimed both for the local health care system, as well as for individual customers.

“Early responses to an industry survey suggested that three-fourths of the nation’s 2,000 craft distilleries were considering making sanitizer as a way to help health care workers, law enforcement officials and the general public.”

Social distancing rules and regulations have temporarily changed the way we visit stores, cafes and restaurants. To keep up with the times, companies have changed the way customers can purchase and pick up ordered products. Otaniemi-based Fat Lizard communicated clear directions of how customers can pre-order products online and pick up the pre-packed boxes from a ‘kiosk’ at their facilities, without stepping a foot indoors. Overall, setting up an online store or even receiving orders through Instagram’s direct messages have been some of the most popular tactics to combat declining sales.

The mode of transporting the goods have varied from entrepreneurs personally transporting the produce to the customers, such as in the case of Caccu delivering cookie boxes on Friday’s within the capital region, or Kaffa Roastery distributing the daily brew on wheels to customer’s enjoying the spring weather outdoors. Lehmus Roastery also recognized that their regulars belonging to the risk groups couldn’t access the products in a normal manner and thus have brought them cappuccinos as a goodwill effort.

Safety comes in numbers even in the age of social distancing. Entrepreneurs have made an effort to market and provide visibility to other small companies’ products and shed light into the harshness of the situation overall for the whole community of small players. They’ve also taken action to collaborate action beyond words. For example, building on a collective of small actors, Kaffa Roastery’s initiative Tue Pientuottajaa, has developed a platform that makes the smaller companies in need of support more visible and provides a direct channel for customers to purchase their products online. In similar vein, a community-based effort #kotonakotimaista organized by a Sami Huuhtanen from RPS Brewing company, not only supports food and beverage companies, but includes small producers overall in the Finnish market. The website encourages customers to tag their usage and support through their hashtag.

On a smaller scale, companies have also teamed up with each other. Palms & Berries, a company producing and distributing frozen acai berry packs, surprised their customers with a special treat of smuggling sunflower sprouts from Pinoa within their weekly delivery, which according to numerous instagram story regrams, had been well received and appreciated by their customers. Mettä Nordic and Sugar Daddies Honey Company, in turn, created a joint product bundle Boost from the woods, consisting of wild herbal teas and organic honey.

The craft brewing community has also shown its team spirit once again. Efforts have ranged from ‘Battle of the Brewers’, virtual brewing challenges, in which different companies battle against each other in an user friendly interactive format, to selling each other’s products across taprooms in Finland. There also have been industry wide talks to push the Finnish legislation to allow online sales of beers, in order to ease the situation’s effect on the craft scene.

Lastly, there has also been collaboration between packaged good companies and restaurants. For example, plant-based protein company Vöner and fine-dining vegan restaurant Villd teamed up to create home-delivered portions under the name 911 Delivery at the Helsinki region. Record Coffee, on the other hand, launched #coffeeaid branded products, where a third of sales goes towards gift cards from local cafes and restaurants. Every tenth coffee package includes a gift card to surprise the coffee drinkers.

Instead of the regular face to face interaction, companies have had to adjust to the quarantine by launching modifications of their services in an online format. One of the first ones to react were the craft breweries such as Ruosniemen Panimo and Moose On The Loose Brewing Co., who started organizing virtual brewery tours and interactive tasting sessions. These events operated through the Instagram and Facebook live platforms.

In a bigger picture, as the bars, restaurants and clubs were forced to close for business, there is an acute vacancy for social encounters. This gap was seized by a creative agency Bob The Robot, which quickly pulled together a digital bar, an online hangout open for all users. Initially launched as an in-house platform, there are now plans to expand the service to include a pub, a nightclub, a daytime cafe, a meeting room and even a karaoke bar.

Other brands have also created solutions for the remote workers to connect over social gathering, for instance Mö Foods organizing virtual coffee breaks via Instagram Live and Warrior Coffee launching Finland’s ‘largest’ weekly coffee meetups under their brand new Kaffetuubi website. Also, as life now revolves around the one’s house, there is an opening for novelties and leisure time activities at home. Many companies are providing tips and recipes based on their merchandise, but some are linking their product even tighter to the service aspect. Good Guys Kombucha have set up online kombucha brewing sessions, instructing the users in a cooking course style.

These examples show that trying times can also result in creative solutions, transforming how we operate during a crisis – and perhaps, in the aftermath as well. We hope these efforts can serve as an inspiration point for re-examining your own habits and field as well!

DesignBites is a multidisciplinary Aalto Design Factory research project investigating the needs and practices of experimentation and design work in food and beverage startups and SMEs amidst their internationalisation efforts. We started our longitudinal research project in 2018, and are now tracking the efforts of over 40 SMEs. Follow our journey from: Twitter & Instagram