Experimenting during the pandemic

CREATIVE RESPONSES OF FINNISH FOOD VENTURES AMIDST THE CRISIS

Based on interviews from 24 Finnish food ventures and 844 Covid-19 related Instagram posts in March-May 2020 from 66 Finnish food ventures, we found that many companies were active experimenters right away when the pandemic hit. While the social media posts consisted mostly of communications and marketing content, 152 posts from 40 ventures showcased new products, services, sales channels and actions. The 24 interviews revealed 86 further experiments, in all arenas of the companies’ business models.

The entrepreneurs described the crisis lowering the threshold for experimentation through need to compensate for lost revenue, sense of urgency or simply more time to experiment due to the cancelled events and commitments. Furthermore, many of the experiments would result in new skills, relationships and build brand recognition through increased publicity. Some would even end up becoming permanent additions to the solutions portfolio of the ventures.

“The hand sanitizer is still a part of our product portfolio and probably will be also in the future. […]  However, compared to now, it probably will be more important in the hotels, restaurants and catering sector than in the retail stores.”
– Mikko Mykkänen / Helsinki Distilling Company 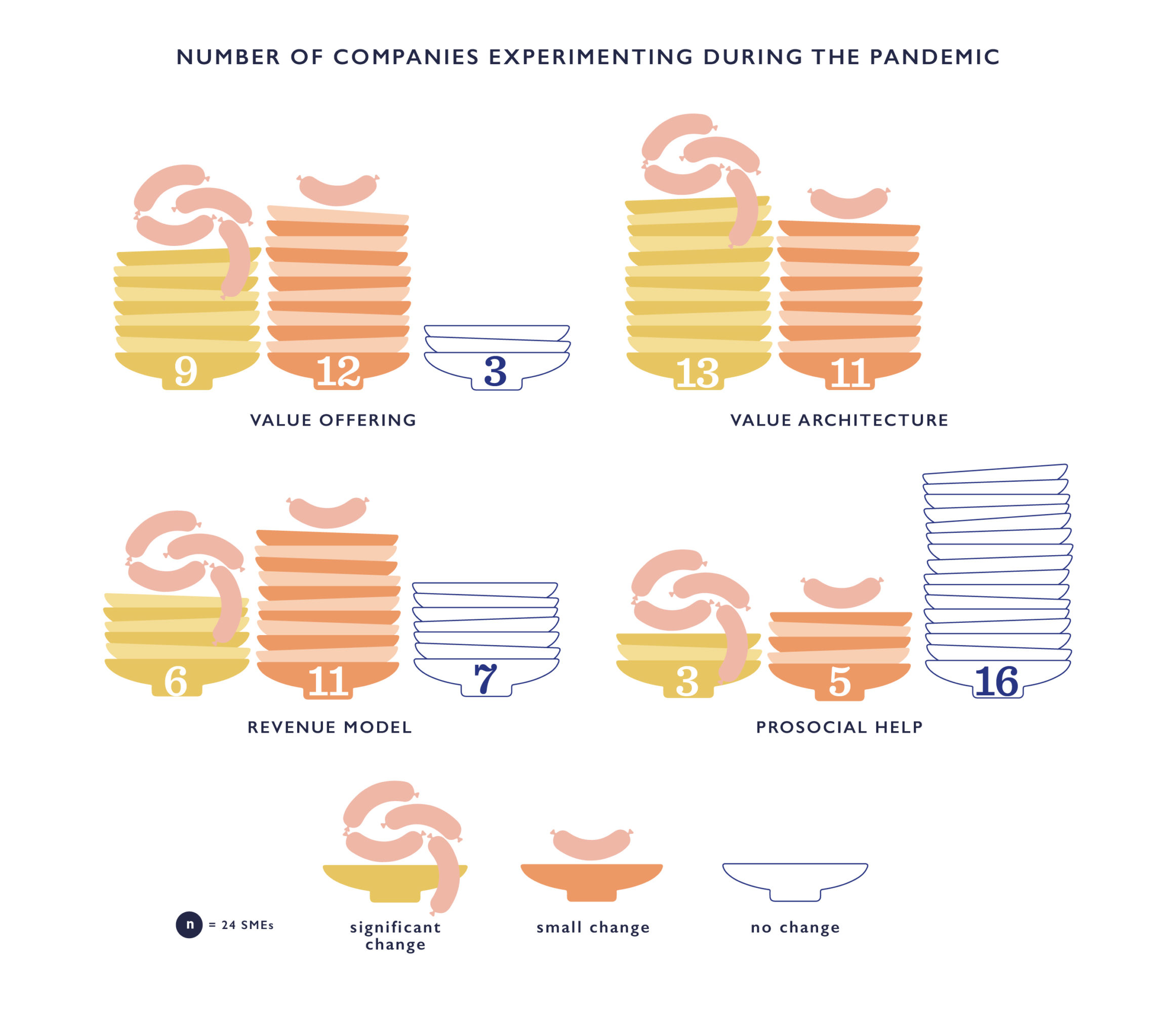 ACTIONS IN THE BACKSTAGE – NEW WAYS OF CREATING VALUE AND REVENUE

Experiments with the value creation architecture or revenue model were not necessarily visible to the outside eye but were prevalent with the ventures. All interviewed ventures had tried out some changes in their core competences and resources, pulling from example employees hobby skills or leveraging the pandemic to initiate remote collaboration. Some made also changes to their production process, increasing hygiene standards or streamlining processes. Trying out new solutions in capabilities, production and partnerships were often sparked by the desire to launch new offerings, but also functioned in the opposite direction of entrepreneurs finding creative new uses for the resources at hand.

Experiments in distribution processes and partners were mostly incremental, whereas experiments in internal value creation processes included more radical shifts from pre-crisis operations. For example, Arctic Kombucha had to transfer its business focus from the initially planned restaurant sector to consumers, basically rebuilding its whole value creation process. For Palms & Berries, the pandemic acted to speed up experimentation towards a subscription model.

BUNDLING PRODUCTS AND EXPERIMENTING WITH NEW TYPES OF OFFERING

Most of the experiments done by the food ventures were product-related. In addition to more incremental changes such as modifying existing products or bundling products together, many ventures would introduce new products or even enter completely new product categories. Examples of radical changes in product portfolios included Kyrö Distillery and Helsinki Distilling Company both entering the market of hand sanitizers. Also, Helsieni introduced new non-food products of mushrooming knives. Collaborative product experiments like collaborative bundles or co-created products were almost as frequent as experiments done within the companies. For example, Mettä Nordic and Sugar Daddies joined their forces to create an immunity boosting product package, and Kaffa Roastery bundled up its coffees with sweets and treats from other local food ventures. 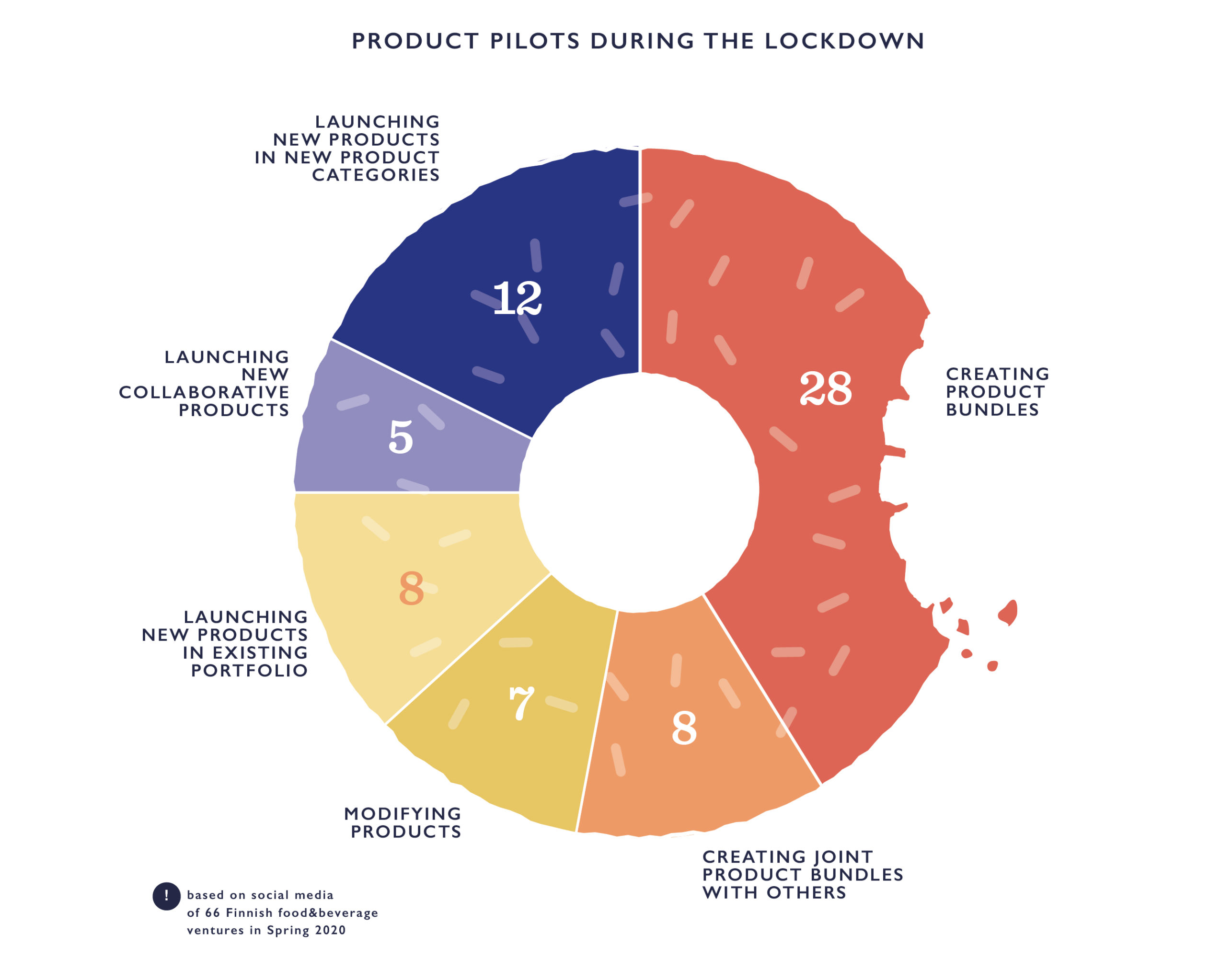 GOING ONLINE AND TO HOME DOORS

In addition to products, many experimented with new services, often online. For example, Warrior Coffee launched a virtual coffee break and Mö Foods moved the launch of its oat-based drinks online. Many also tried out new delivery services, with for example Baba Foods bundling up products originally meant for business-to-business sales and delivering these to customers’ homes, and frozen-dough company Caccu delivering freshly baked cookies to its customers every Friday during the first few months of the pandemic.

The closing of restaurants, cafes and bars, as well as restrictions in in-person meetings, resulted in cancelled events and sales, driving companies to experiment with sales channels. These experiments included launching webstores, establishing new physical sales points, such as kiosks and windows on the walls, as well as collaborating with other to expand distribution. For example, Helsinki Distilling Company opened a corona kiosk in front of its production facility where it would sell its hand sanitizers, long drinks and masks from a partner, and Espoon Oma Panimo introduced a beer delivery truck that would drive around Espoo to reach homebound customers. Knehtilän Pieni Puro, on the other hand, added both lifestyle brand Minska and food hub Uudenmaan Ruoka as new sales channels.

“During the same week as the lockdown was issued at least all the companies in within our network started to build online stores. Everyone was exchanging messages in a Whatsapp group and comparing which is the best platform and so on. So we were all in the same situation, and it has been really active and sort of small circles, and good collaboration amongst us.”
– Topi Kairenius / Fat Lizard Brewery

Not all experimentation was directed towards creating revenue or brand visibility. The 9 identified prosocial experiments ranged from helping out critical and at-risk groups, such as donating products to health care professionals, to supporting fellow entrepreneurs. For example, Caccu would, inspired by an idea from one of its customers, deliver freshly baked cookies to the Meilahti Hospital staff treating corona patients. They got the inspiration when some people participating in their cookie delivery raffle suggested they’d donate the prize if they won – the founder loved the idea, got in touch with the corona department of Meilahti hospital and set up the delivery.

Many ventures also took part in the #supportyourlocal movement. Beyond social media, ventures joined forces to simultaneously help themselves as well as their communities. For example, Record Coffee supported struggling restaurants and cafes through its #coffeeaid campaign. The crisis could give both ventures and their customers a pause to think about how they wanted to use their energy and resources.

“We have been thinking about different possibilities to help others. Perhaps through that synergy, we started and are bringing out a pollinator guide and seed bag, so we could bring a little more community-feel to people, and at the same time use the fact that people are reachable now and thought about things they would like to do.”
– Ville Rinta / Sugar Daddies Honey Co.

BEYOND THE PANDEMIC: KEEPING UP THE SPIRIT OF EXPERIMENTATION

Although, action lies in the heart of entrepreneurships even beyond times of crisis, the Covid-19 pandemic acted as a catalyst for many food entrepreneurs to step up to experiment, innovate, co-create and generate a positive impact on the food ecosystem. The entrepreneurs not only expanded their offering with new products and services created either in-house or collaboratively, but also transformed their whole business models and increased their capabilities for subsequent value creation and experimentation. Time will yet show the eventual effects of the experiments done amidst the crisis, but it is for sure that you will learn more from action rather than inaction.

You don’t have to wait for the next crisis to give you “permission to hustle” but can start experimenting already today with the tools and tips in our experimentation toolkit!