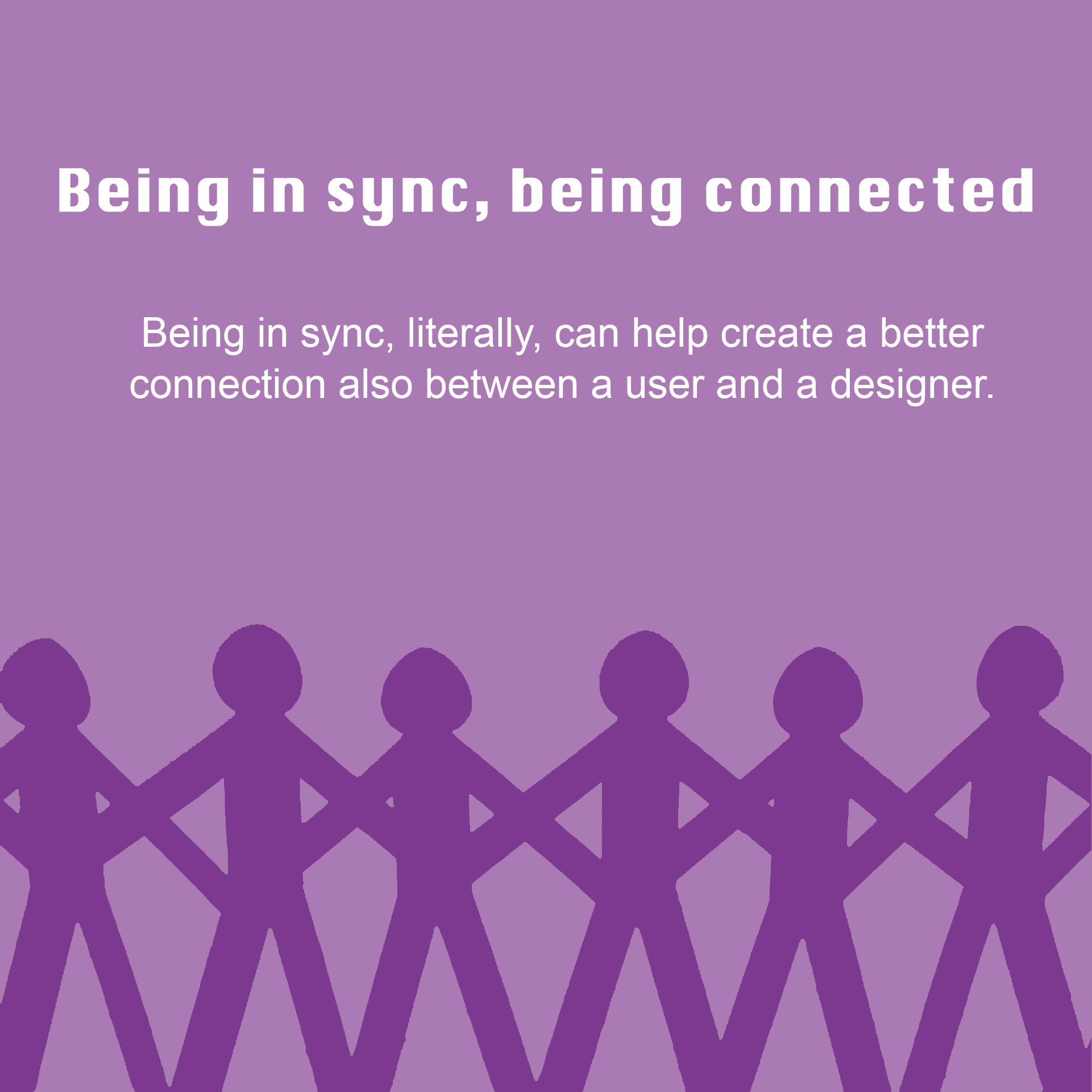 Being in sync, being connected

For designers it is important to connect, build trust and a good relationship with the user. Building a relationship has been studied elsewhere. Let’s see what we can learn.

We build relationships throughout our lives. Have you ever thought about what happens when we feel affiliation or even attraction to someone? When we like someone, we change our behavior even without realizing it. We tend to automatically synchronize our body movements with people that we like. As an example, when we are talking with a person whom we like we tend to unconsciously mirror our body posture and hand movements with that person. So, if you notice that the person you are speaking to, is sitting exactly like you or mirroring your hand gestures, it might signal that the person likes you. Synchronous movements can also foster social bonds and bring us joy in group activities such as dancing, sport and musical interaction.

But can we predict the level of attraction by just measuring synchrony? Researchers addressed this question in a real-life blind dating experiment. They conducted their research in a music festival, where they asked people who had never met to go on dates to a dating cabin. Participants had two minutes to look at each other and two minutes for discussion. Their visible expressions such as facial expressions, body postures and eye contact were measured. In addition, their heart rate and skin conductance were measured. Skin conductance measures sweating of the skin caused by stress or emotional reactions. After the experiment participants were asked to rate their partner on attraction and if they wanted to go on a real date. Could you believe that researchers were able to predict based on heart rate and skin conductance synchrony how attracted participants were to each other. So, they could predict dating success based on invisible aspects of synchrony.

How synchrony can so effectively increase feeling of connection, whether affiliation, attraction or generosity? Researchers have proposed that the effect is probably produced by a mixture of neurohormonal, perceptual and cognitive mechanisms. It has been suggested that synchrony can trigger release of neurohormones that produce emotions such as pleasure and reward. Also, nonhuman primates’ social bonding mechanism, known as grooming, activates the release of neurohormones. It has also been proposed that synchrony leads to self-other blurring which allows us to experience other people’s actions and meditates emotion exchange between people. Synchrony can also be an indication of successful cooperation, which makes us trust that people will cooperate with us in the future.